Frank Matcham was the most prolific theatre architect of the late nineteenth and early twentieth centuries. During his career he designed or significantly reconstructed over 160 theatres in the British Isles – from Aberdeen to Portsmouth and from Dublin to Norwich. Today only 24 of his entertainment buildings survive – these include the Circus, Blackpool Tower; Royal Hall, Harrogate; Theatre Royal, Newcastle upon Tyne; Gaiety Theatre, Isle of Man; Tivoli Theatre, Aberdeen and the London Palladium.

His understanding of the close relationship between performance and architecture is an essential element of his legacy – and today almost 90 years after his death actors and actresses still speak of his wonderful ability to create theatres of enchantment – performance spaces that truly work for both performer and audience.

This new book contains essays that cover hitherto unexplored elements of his work and are introduced by Alan Bennett with his recollections of Matcham’s Empire Palace of Varieties and the County Arcade in his native city of Leeds.

The recent discovery of a large collection of Frank Matcham’s architectural drawings has allowed theatre researchers to delve even deeper into the work of this extraordinary architect. The book contains many images hitherto unpublished – including some spectacular images of Matcham’s own watercolours, full colour architectural drawings of the Hackney Empire and over 100 illustrations about his theatres and his life.

Frank Matcham was not recognised as an important architect in his day – he only made it into the Dictionary of National Biography as late as 1993. He was considered by some of his contemporaries as architecturally illiterate. Yet his incredible ability to create a magical space has lived on, his name has over the last thirty years been returned to the public consciousness and today his theatres are recognised as being of international significance.

This important new book begins to unlock the secrets about the way he worked. It identifies for the first time the people with whom he collaborated on a regular basis and reveals a significant amount about the way in which a relatively small architectural practice was able to create so many wonderful buildings in a little less than thirty years.

Today Matcham’s remaining buildings are considered to be theatrical jewels and many have been restored often with the assistance of the Heritage Lottery Fund. It is to be hoped that this renaissance will continue and that some of his remaining `Sleeping Beauties’, such as the Tivoli Theatre in Aberdeen, can be saved and re-awakened for the benefit of the Nation.

This book explores the life and work of an extraordinary Victorian polymath who wrote the definitive treatise “Modern Theatres & Opera Houses” in the late 1890s. He was founder of the British Fire Prevention Committee which also organised the Great Fire Exhibition at Earl’s Court in 1903. He acted as Theatre Consultant to both the Roya Opera House and the Theatre Royal, Drury – installing unique substage machinery which modernised backstage working practices at the beginning of the twentieth century. This is the story of a man driven by a desire for improvement in all areas – he even founded the Institute of Structural Engineers and edited their periodical until his untimely death in 1919. The book has a preface written by his son Sir Eric Sachs and contributions from recognised scholars including Terence Rees, John Earl, Iain Mackintosh and David Wilmore 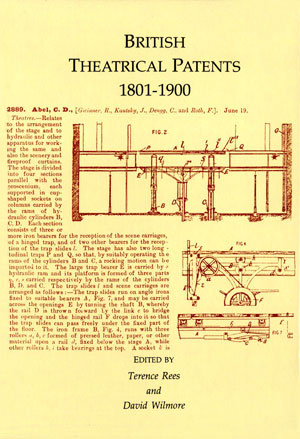 From the rich archives of the Patent Office (now part of the British Library), Terence Rees and David Wilmore have produced a major source of information about the technical marvels of the nineteenth-century stage – from an elephant turning a somersault to aeroplanes flying through the air (in 1895). This book provides a definitive list of all the theatrical patented inventions of the nineteenth century. It covers the full gamut of theatrical endeavour; lighting (gas and electric), magic, illusions, fire prevention, ventilation, stage machinery, safety curtains, opera glasses, seating, fire-proof solutions ………and much much more! Every patent is provided with a description and often a line drawing. It is an invaluable resource for theatre scholars and is provided with definitive indexes based on patentee surname, theatres named, and subject matter. 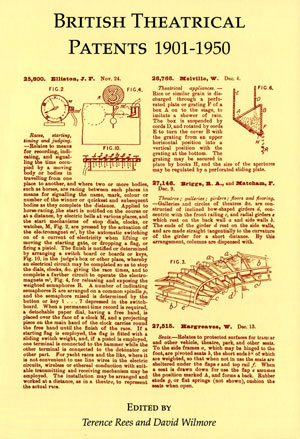 Like the earlier volume covering the nineteenth century this collection of patents registered at the British Patents Office is a valuable resource for anyone interested in theatre, engineering, magic, and architecture. It includes many fascinating developments relating to moving lights, projection, dimming and control, as well as staging, illusions, and a many other aspects of theatre technology.

This second volume continues where volume one left off and covers a period of immense change in the theatre. It demonstrates the development of stage lighting from its earliest electric days through to the halcyon days of Strand Lighting. Interestingly the number of inventions between 1901-1950 is almost double that of the previous century. This volume also includes many important inventions including Frank Matcham’s cantilever patent. Comprehensive indexes are once again provided making it a book that you can easily access and dip into time and time again! 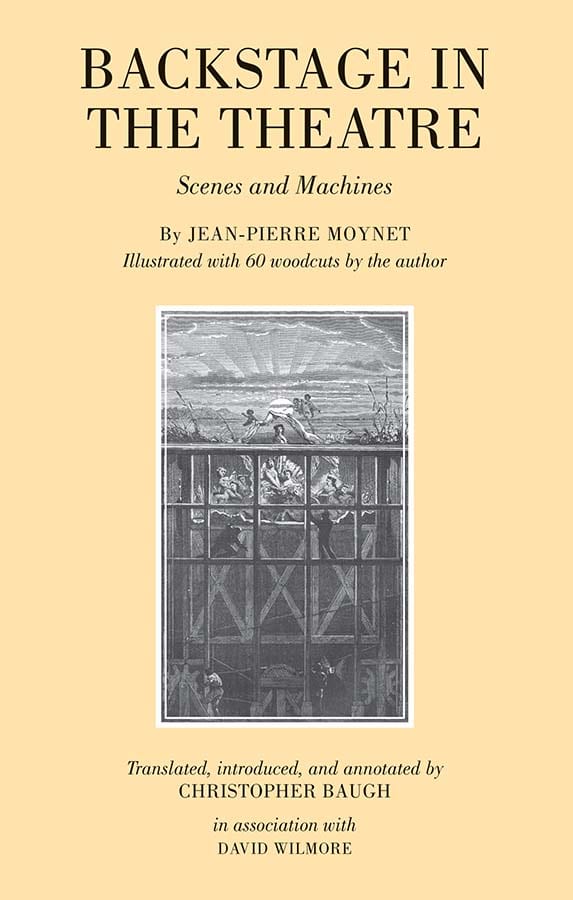 Backstage In The Theatre: Scenes and Machines

This book has been translated from the original French and reproduced as a facsimile copy with all the original 60 woodcut engravings by the author. It tells the story of backstage life in the nineteenth century; it explores the stage machinery, scenery, lighting and illusions. An extraordinary book now available in English as a literal translation for the first time. Not only does it explain “how they did it” but it also takes us backstage and describes the atmosphere of a theatre in those early days – you can almost smell the greasepaint!